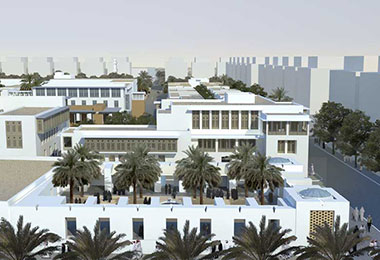 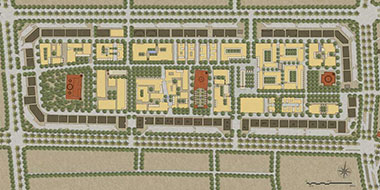 Al Ain is the fourth largest city in the United Arab Emirates. Duany Plater-Zyberk was asked to master plan the central district for the year 2030. They drafted a set of urban design principles and our firm took a specific superblock and applied these principles to the block, the vast interior of which had been cleared of all but three mosques, and consolidated under the ownership of the city.

DPZ developed a street hierarchy, and a typical block cross section. They proposed moving the principal service roads to the interior of the superblocks. Streets and building pads in the block we developed had to accommodate the three existing mosques, existing perimeter property lines, new mid-block signal locations, pedestrian crossings and inter-block greenways. Mid-block buildings were limited to three stories by Al Ain’s new 2030 plan, and by decree and custom the perimeter buildings are limited to four stories.

We developed a system of public open spaces, though the sun and the heat required that they be reasonably small and shaded. There is a separate set of unconnected semi public spaces for larger buildings. Though modern standards preclude the re-introduction of three meters sikkas, a tertiary system of connected rights of way provides the same pedestrian permeability sikkas currently afford the city. Streets are lined with as many trees as parking loads will allow. Each of the mosques was placed in a more formal and integrated setting with shaded and enclosed places to gather. A principal market square sits at the intersection of the major north south and east west streets.