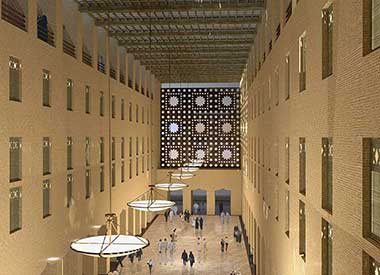 There is a standing development proposal for the Al Mudheef block that pre-dates the master planning efforts by the DPZ team. The site has approximately 90,000 square meters of land. The program for the project consisted of approximately 159,000 square meters of residential, office, retail and hotel program. The proposed program did not conform with Al Ain height limits, as many of the buildings ran to six, seven, and even nine stories.

During the January charette MPCA re-designed the Al Mudheef superblock according to principles from the Al Ain 2030 plan, as they were more specifically formulated by DPZ’s master plan guidelines. Significantly, Nelson Nygaard, the transportation consultants, had just recommended that the high speed train station be located on the Al Mudheef block.

Open spaces were integrated into the plan. Large plots were set aside for block-wide utilities. A second mosque site was designated.

The proposed program was then matched up with buildable pads from the new block layout, to test whether a super block designed according to the principles of the 2030 plan and the master plan guidelines could accommodate the proposed program plus the 16 meter service alley, the train tracks extension, the public parks, and the municipal parking, without exceeding existing height limits. The counter proposal, with these imposed constraints accommodated 95% of the proposed program, including 100% of the hotel and office program. The parking totals for the redesigned property alone stands at about 2800 spaces, matching that existing proposal’s parking count.

The hotel is entered off the boulevard to the north. It is organized around interior courtyards and serviced from the new alley on its southern edge. Both the hotel and the office program are fully integrated into the street network. The combined hotel and office program forms a public plaza in the northeast corner of the block.