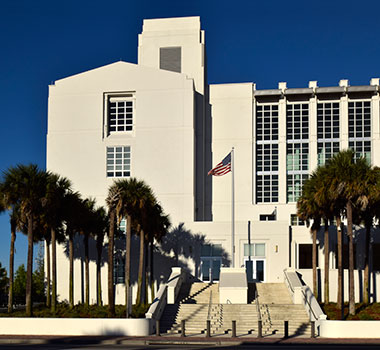 The courthouse site comprises a 300′ by 300′ block, and part of an adjacent block at the southwest corner of the central business district. A portion of the street separating these blocks is to be abandoned. The program is for a 100,000 square foot federal courthouse. The program of a courthouse includes the courtrooms themselves, judicial chambers, and those agencies that prosecute, defend, house or escort defendants.

There are at least two fundamental symbolic contradictions that require resolution. First, as the courtrooms themselves are typically buried in the core of the upper floors, courthouses run the risk of looking like office buildings, belying their significance. Second, they are nominally public buildings but are increasingly secure, resistant to bomb blasts, and difficult to access. The courtrooms here have been placed on the upper floor where they are marked by their silhouette, and the public, multi-story glass lobby dominates the long exposure on highway 1. Secure parking has been pushed up due to the water table, so the entrance sits a full story above grade, marked by a long flight of steps and a monumental ramp. A porch delivers people under cover from the corner to the lobby entrance.