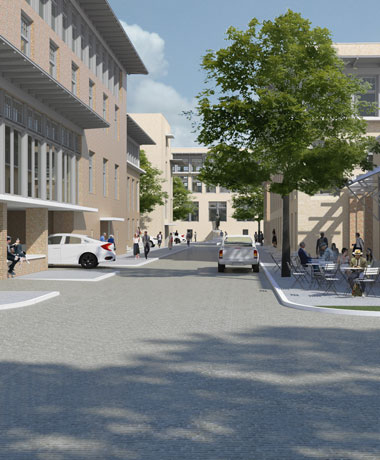 This four acre site is just off the SE corner of the University of Notre Dame campus. It is at the intersection of two large roads, a gateway of sorts as you approach the campus from the east. The property has been assembled from private and University owned parcels. The University has been instrumental in developing or partnering in the development of housing, research facilities and mixed use on the eastern and southern edges of its large campus.

There is an outparcel in the middle of the assembled parcels that has to be accommodated. There were rights of way and utility lines that had to be abandoned, and the land, partly in the city and partly in the county, needed to be consolidated within the city limits of South Bend.

There was no program. The first phase of work was a site capacity study to see what the site could accommodate, what there might be a market for, what could be parked, and what would comply with existing zoning. The studies looked a hotel on the corner, and some combination of townhouses and condominiums for most of the site. There was a modest commercial component.

Parking requirements in South Bend are left up to the market. Parking was tight by any measure and most parking was accommodated in a ground floor parking podium. Reasonable height variances would be required from the city. As always, parking and storm water storage were the limiting factors in maximizing the program. There can be no additional storm water added to the city system. Storm water is currently stored off site in a University owned pond. Storage requirements based on higher coverages would have to be stored on site. Coverages will cap at around 75-80%.

The perceived value of the site graded from higher values facing the campus on the NW edge, to lower values on the southeast corner, which abutted or faced strip commercial uses. The street coming in from the north had to be kept in place. Internal streets had to stay away from the main intersection and so the main internal street doglegged as it came south. A central space on the interior of the assembled parcel created valuable exposures where there was little perceived value.