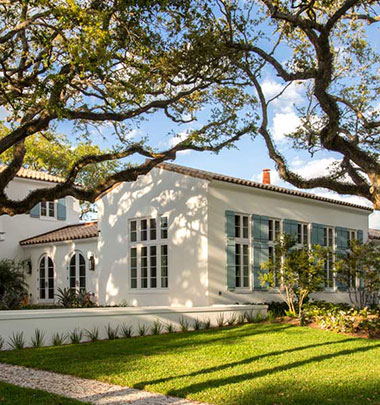 The Riomar neighborhood of Vero Beach was first settled in the 1920-s by Midwesterners. It has a canopy of live oak trees that arch completely over many of the streets. This particular lot was completely covered by the oak canopy and would have been unbuildable without moving or removing some trees. We studied a number of house configurations for their impact on the trees. In the end we ended up having to relocate five trees, the largest about forty tons. All the trees in the front of the house were relocated.

The owners were interested in a certain language for the house, a language common to the area houses of the twenties. So we studied these antecedents for their size, spread, the widths of their wings, and the size of their windows. Most of the antecedents were relatively small with thin wings that provided good light and cross ventilation.

The site plan we developed has two parallel wings, connected by the entry hall, that stretch between side setbacks, so that the house is shallow but wide, with staggered frontage that gives it the appearance of a smaller house. However, the main advantage of the configuration is that it checkerboards the site, with two courtyards – an entry courtyard and a pool courtyard – cradled by the two parallel wings. Each wing opens onto both courtyards.