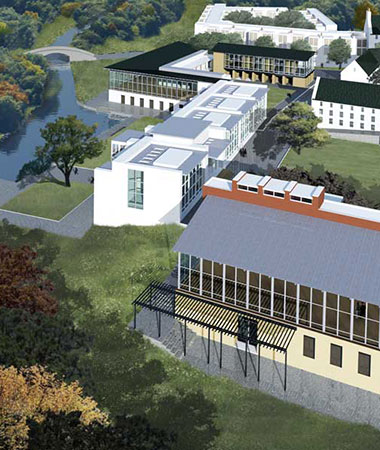 This fifteen acre site is part of a seven hundred acre DPZ master plan for a proposed development on the western edge of Edinburgh. The site is bounded on the south by an existing road, on the west by a ravine and creek, and on the north by the Union Canal built around 1820 to connect Glasgow and Edinburgh.

There is a magnificent canal bridge over the ravine just off the northwest corner of the site, and just to the west of this bridge, a livestock bridge connects fields that flank the canal.

The site has a manageable fall from southeast to northwest. The ravine has grades of about twenty percent. There is an immovable 10 inch gas pipe and easement running diagonally through the site. The common is about a hectare in area, the size of Charlotte Square in New Town, Edinburgh.

The program consists of the visitor center for a proposed new national garden, a conference center and hotel, a market, a neighborhood school, retail and housing. The thirty four acre garden, across the ravine to the west, will be designed to accommodate about half a million visitors a year, and parking for visitors requires a large portion of the site between the common and the highway. There is a block of retail and housing infill in the middle of the common which divides a large space into two spaces more in keeping with the two, three and occasional four story buildings that line them.