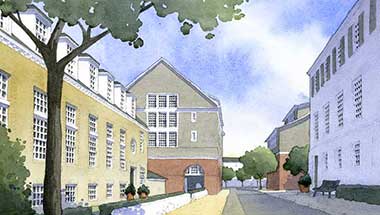 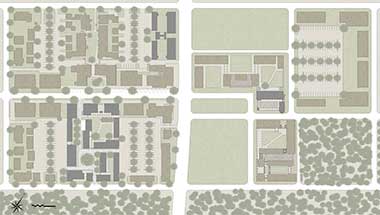 The unpromising site for this housing is in a small retail district, between mid-block parking lots that serve the retail tenants. Both adjacent blocks are approximately three hundred feet on a side. The housing, comprising approximately forty units, takes up an acre and three quarters. The street was to have been a simple double loaded street of condominiums. We reconfigured an existing street, making it narrower and offsetting it in a dogleg or a pinwheel, from which the parking lots and garages can be discretely accessed. This in turn provided the opportunity to make two semi public spaces onto which most all of the housing could face.

The pinwheel and the courtyard behind the retail buildings are both on the order of ten thousand square feet, each roughly one hundred feet on a side. At the same time we provided for larger spaces, we managed to accommodate an extra thirty five percent more housing than the straight double loaded street originally provided for. The mid-block parking lots are neutralized by treating them as you would treat alleys. All but four garages face onto these already compromised exposures. This allows the rest of the site to be relatively free of cars.

The courtyard garden is accessible to both the pinwheel and to Main Street by passages, and this entire series of semi-public mid block pedestrian spaces links up with a row house mews on the north side of Main Street designed by Urban Design Associates of Pittsburgh. This combined site plan provides the small retail district with a series of accessible gardens and semi public spaces of more than seven hundred feet in length.