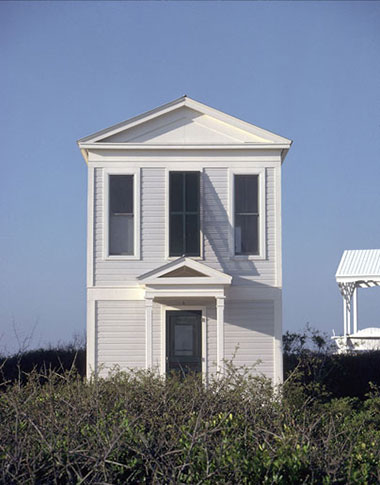 Robert Davis, the developer of Seaside, required low impact rental cottages that could be built right on the construction control line on the high dunes above the Gulf of Mexico. In describing what he wanted, he referred to the so-called honeymoon cottage that Thomas Jefferson lived in for two years as he worked on Monticello. Jefferson’s cottage is built into the hillside, presenting a one story aspect from the lawn above, and a full two stories from down the hill. The site section of the Seaside dunes held out the possibility that the cottages would appear as diminutive one story cottages from the beach below, minimizing their impact. The second phase at the county road presents a more continuous two story wall.

The beach cottages were completed in two phases. The first group of six, commissioned in 1988, are forward of a footpath that runs the length of Seaside, parallel to the shoreline. The site is divided in the other direction by a beach access easement, an extension of East Ruskin Street, which leads to a beach pavilion and dune walkover. The program for the cottages nearest the dunes called for one bedroom and a living room and porches, and the cottages at the road were to have two bedrooms and a screened porch.

Seaside was conceived as a town that would be built from the repetition of certain gulf coast residential building types. A reasonable amount of repetition was imagined to be both visually desirable, and financially necessary. As the town developed and prospered, however, a pattern of singular custom houses emerged. The Honeymoon Cottages, as a group, were designed as an alternative visual model for a typical street. They also sought to ennoble necessary repetition. In this regard, the first project by Scott Merrill, established an ongoing interest in prototypes and repetition.