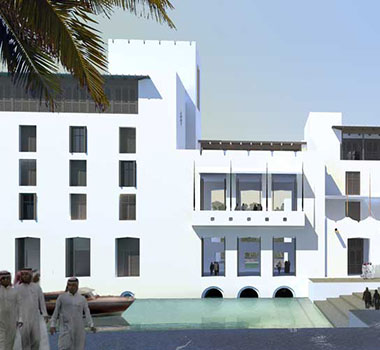 This 100-room hotel is on a proposed plaza on the west end of a DPZ master plan in the Grand Mosque district of Abu Dhabi. The site borders a long narrow tidal inlet, and the hotel sits at a point where the plaza descends to meet the end of the inlet.

The extended hotel and spa program occupies parts of three small, low density blocks of the master plan. It includes a little over 100 large 750 square foot rooms concentrated on the block facing the water. The preponderance of the rooms face either the plaza or the water directly. The ground floor of this block is organized around a number of low scale courtyards that accommodate pools and a spa.

The middle block handles the servicing of the hotel. There is parking under the entire block. You enter the hotel on this block, down a short colonnade at the corner of the plaza, past two restaurants. The hotel lobby sits prominently astride these two blocks, like a bridge over a canal, with water views in both directions. A third, smaller block accommodates a separate spa for women. This facility is secluded and private, organized like the hotel, around a series of outdoor spaces.