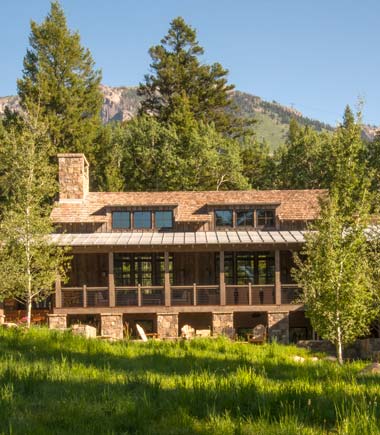 The site for this house is north and west of Jackson, Wyoming at about 6350 feet above sea level. It is on the east side of the range of mountains that includes the Tetons ten miles to the north. The range rises dramatically from the Snake River plain. The site is at the end of a road that comes north from Wilson, Wyoming, along Fish Creek.

It has a gentle ten percent slope covered with aspens and firs, some of which are several hundred years old. There is a substrate of boulders left by retreating glaciers. There is a fault line just a few hundred feet to the west of the site. The area gets lots of snow but relatively little annual rainfall.

Jackson Hole, like the lake region outside Austin Texas, or Georgian Bay northwest of Toronto, has developed a discernible regional vernacular that is fostered in some part by the area’s isolation and the relative concentration of buildable sites. Plans are typically thin, the roofs broken up, as if accreted. This tradition is nominally rooted in simplicity and rusticity, qualities it sometimes strains to maintain with overweening programs and budgets.

The county has strict height limits. This has served the valley well but is a little onerous on sloped sites, so the roofline of the house is driven in large measure by a need to step in two directions with the fall of the site. The series of smaller roofs also lends a large house a smaller scale.