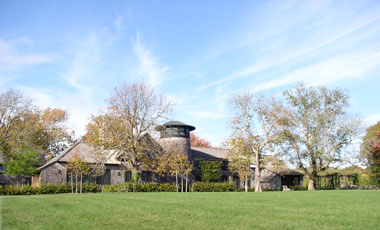 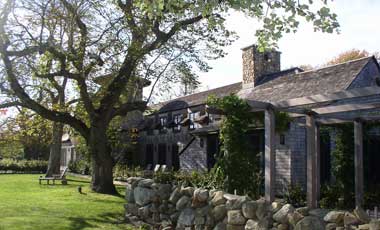 This pair of houses is situated on a ninety acre parcel of woods and fields, on the edge of an Audubon easement and a cow pasture, and on a rise overlooking a bay and a coastal marsh. Stone walls separate the fields and cedar and chestnut trees mark the immediate area of the houses. One approaches the houses from a long road on the north side, through the woods, on the edge of a field.

There are two discernible building traditions in the area, an eighteenth and early nineteenth century tradition of small, stolid Capes and Greek Revival side halls, and a later nineteenth and early twentieth century tradition of Shingle Style, Queen Anne, or Colonial Revival summer houses. The former tradition has no models for larger houses, while the latter tradition is difficult to draw from without stepping into overworked territory.

The design for these houses draws a little from both traditions, but they are organized around three courtyards, a residential plan configuration uncommon in New England. The first courtyard, a service court for both houses, is entered first, through the north wing of the westernmost house. The small middle lawn court is raised above the service court, enclosed by porches of both houses. The third, and largest court, accessible only from the larger of the two houses, is the space around which the easternmost house is organized.

The informal irregularities of the roof belie the straightforward organization of a courtyard house. The principal compositional pleasures of the house derive from the opposition of these two tendencies.