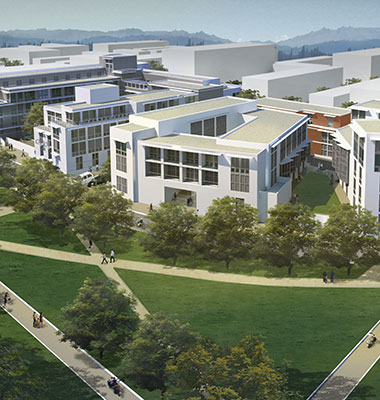 The site is a former naval base on the bay four miles south of downtown San Francisco. The master plan provides for an immediate neighborhood of about 2500 residential units set amidst a much larger mixed use program that includes office and research space, and a new stadium for the San Francisco 49ers. Our site is on the bay facing a new park at the water’s edge, and at the foot of the boulevard going down to the water. The block is roughly 225 feet by 500 feet, with a dedicated 40 foot mid-block alley dividing the block into separate building parcels, each with their own parking podium.

The program called for about 125 units of flats and townhouses. Larger buildings of flats bookend the blocks on the larger streets. Townhouses, including stacked townhouses, flank the alley and line the park side of the block. We accommodated a program of about 187 units, or fifty percent more than what the program called for. This was possible in large measure because the mid block spaces were designed as nice principal addresses for units that couldn’t face the streets.

The courtyard on one parcel is about 6500 square feet, or about the size of Place Furstemberg in Paris. All four sides step down to admit more sunlight into the courtyard. A service alley skirts this space, making it an accessible and slightly more animated.