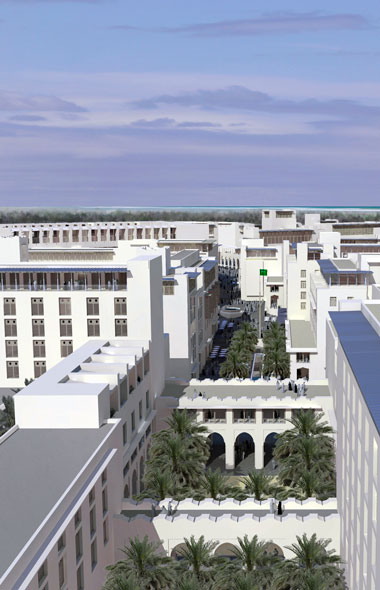 This was a collaborative competition with the master planners, DPZ. The architecture was designed and documented over a period of two weeks.

Roads and streets in Saudi Arabia are typically very wide so the most interesting prospect of designing the architecture for DPZ’s plan was the further development of a relatively narrow pedestrian retail street in a zone of the parcel that required seven story buildings that meet allowable densities. This street extended approximately 500 meters in length.

A second major initiative was to study alternate sites for a large hotel. Both hotel alternates have large 7000 square meter footprints, are organized around three courtyards and are located at the end of a series of public spaces. The east hotel site has gardens that extend the pedestrian street. The plaza site has a courtyard that extends a series of public spaces going out toward the roundabout.

Parking had to be accommodated primarily in two levels of sub-grade parking. A small portion of the total load of 7000 cars had to be accommodated above grade, so the main plaza, and one of the two hotel sites was elevated five meters. Special structures in semi-public spaces conduct people up from the large parking structures into the most beautiful spaces of the plan, and allow light to penetrate down into the garage.

The retail street had to rise over this parking from two directions, but this rise and fall in the street was combined with a narrowing of the street toward the plaza, and the combination had the effect of enhancing the approach to the central space.

Blocks throughout the master plan are approximately 75 meters on a side. Buildings are typically 17 or 18 meters wide and suitable for any of the uses contemplated. The site coverage limit is 60%, and with narrower streets this allows for large semi-public mid-block spaces. There is a system of walks and passages that connects these courtyards in a continuous circulation system.