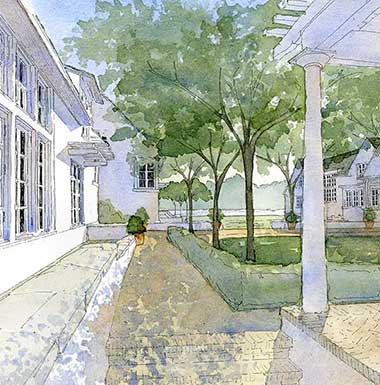 Kiawah is known for long views over tidal rivers and grasslands but as in most places, there are interior parcels of land with no long views and relatively less inherent value. The site plans for perimeter lots- whether on estuaries, or lakes or oceans or golf course, are almost dispiriting in their predictable sameness. The lots that often provide the most pleasing surprises are those lots with no preferred view where interest has to be created on the lot interior.

This three acre parcel of a dozen lots has remained empty as adjacent water parcels have been built upon. It is at a dead-end of the street and a large portion of its perimeter is unlikely to be afforded street frontage. Following in the planning tradition of Radburn, New Jersey, or more recent projects like Rosewalk in Seaside, there is a series of semi-public spaces down the middle of the two blocks that augments private gardens and yards. Consequently a number of the houses have two entrances and two fronts- one off the street, and one off the public gardens. The semi-public spaces are larger than any private gardens could be so there are a variety of spaces onto which the houses face. This means that the semi-public spaces benefit the houses not only when these spaces are being actively used but even passively when sitting in the house and looking upon mid block spaces lined with houses as carefully designed on the middle of the block as they are on the street.