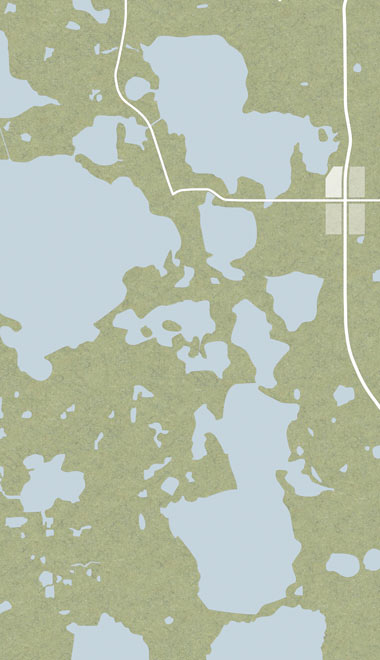 This area, just west of Orlando, was settled in the late nineteenth century. The outstanding natural feature of the area is a chain of lakes, and what land there is threads between these lakes. The roads are narrow and many of them are single lane dirt canopy streets arched over by native live oak trees. These attributes distinguish the area from the rest of Orange County and the preservation of its scale is important to the town.

This project is at the intersection of two arterials. Apopka Vineland Road helps carry heavy traffic along the eastern edge of the lakes. The other, Conroy Windermere Road, carries traffic into the heart of the lakes, narrowing and backing up as it approaches the site. The thirty-seven acre parcel on the northwest corner of the intersection is encumbered by water storage requirements for two other large parcels at the intersection. More than twelve of the thirty-seven acres will be set aside for on-site water storage and filtration. There is a forty foot fall from the SE corner to the NW corner of the site with three to five percent slopes. The lake water on the parcel’s NW needs to be protected from run-off. Stored water will have to terrace and filter. Upper terraces will be seasonal. Even the lower terraces can be used recreationally with over-excavation and permeable fill.

The retail program requires surface parking and clear visibility from the main intersection. Otherwise, the big retail tenants are completely embedded in the plan, forming a street on one side that leads up to the hotel, a public space between them, and an eccentric public space where a dogleg forms a space in front of the hotel drop off. Outparcels help form parked courtyards in front of the big boxes. Parking and servicing of the big retail is off the alley on the low side. Large two story porches form the central space, which is closed at one end by a retail outparcel and at the other by the back of a pair of condominiums.