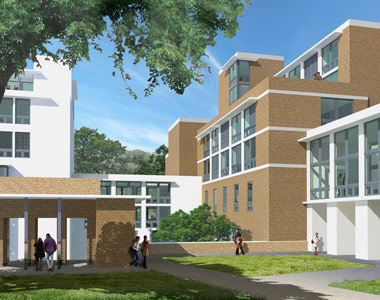 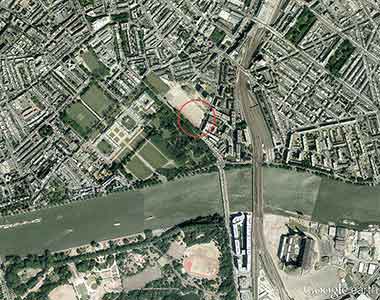 We were asked to study one of four blocks in a master plan for a dense urban site. Our block was approximately two and a half acres and had to accommodate about 400,000 square feet of mixed use heavily weighted toward residential units. The double loaded perimeter buildings needed to be in the range of seven to nine stories in order to meet this density with blocks this size.

The geometry of the block perimeter is a little casual, a response to the looseness of the master plan geometry, which created beautiful interior streets of short deflected views and varying section. The master plan required a mid rise tower on the north side of the block- as the massing of the four blocks was generally higher in the middle of the overall site and as low as possible on the perimeter of the site, where housing on adjacent blocks averaged five to six stories. Our tower faced a narrow, one block green. On its southwest edge our block benefited from broad park and river exposures.

We allowed coverage to drift up slightly so that buildings could be varied in height within a reasonable range. We also tried to further model the buildings to disguise and mitigate their bulk because double loaded buildings are fully twice as deep as the typical housing in neighborhood. We designed terraces that turned large midblock spaces into spaces of more intimate scale. Terraces stepped up on the northern edges of the block. This had the effect both of increasing the exposure to the sun and of mitigating the height of the surrounding buildings, which, in turn, also stepped down a little in height inside the block.

The perimeter buildings approximate two large interlocking “L” shapes that break on the north and south corners of the block. A mid-block path cuts a diagonal route through the breaks in the buildings, providing a sort of elaborate public shortcut that takes in several levels. The massing of the interior block affects a sort of hillside topography. Four lawns pinwheel around the little building in the middle of the block, lending it an outsized importance as you walk through the block and up and down the terraces. The large courtyards admits as much low angle winter light as the program allows. The highest terrace level is on the north side of the courtyard so the garden structure is assured better sunlight.