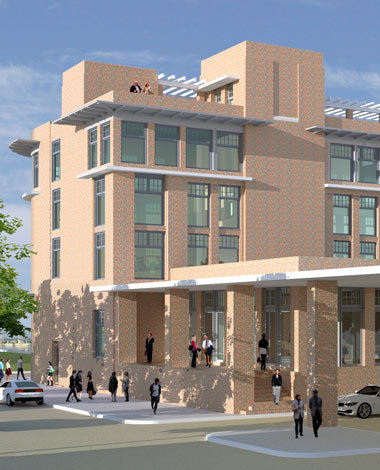 There has always been a strong relationship between Newport’s common, known as Washington Square, and Long Wharf, on the waterfront. The building for the colonial legislature was completed in 1741 and sits at the top of the square, facing directly down to the water at Long Wharf. Peter Harrison’s Brick Market, also once pressed into service as the city hall, sits at the bottom of the square at Thames Street where the wharfs were in the eighteenth century. Since then a block of fill has come to separate Thames and the waterfront.

This is a proposal for a hotel on Long Wharf where the modern traffic artery passes along the edge of the water. The minimum flood elevation is about eight feet above existing grade, so the four-story building sits above a parking level. Half the required parking will be on site, and half in a nearby city parking garage. The program is for 65-80 rooms. Half the rooms face the long south views over the Newport marina. Others face east toward the market and old colonial legislature building or north over a new green.

The master plan for the precinct of the hotel includes the re-planning of the north side of Long Wharf where a proposed green is surrounded by two hotels, a new visitor’s center, a firehouse, and the bleachers of a 1930 baseball stadium; to the east, the creation of a better setting for the Brick market, and the restoration of sight lines from the Colony House to the water; to the southeast, the restoration of a couple of through streets, the double loading of the small commercial properties along Thames Street, the elimination of surface parking along the main street into the city from the north, and the more intense, larger scale development of the marina side of the block.