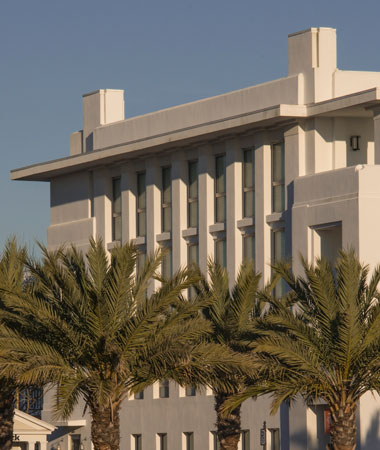 This is a four story mixed use building in Seaside’s Central Square. The site is at the corner of the commercial square and a seventy foot residential avenue that converges on the square from the back of town. Three sides of the building are prominent, two from residential streets. The fourth side is shared with an existing market. There was a requirement that a two story colonnade tie the buildings of the central square together, forming a continuous covered walkway. Balconies are permitted in the upper level of the colonnade.

The ground floor is retail, and there are two apartments in the three floors above. There is a high percentage of the floor plate dedicated to required vertical circulation. Most of the circulation is packed against the common property line. The entrance to the apartments is around the corner on the avenue, so as not to take up inordinate amounts of space on the colonnade and store front.

The second floor apartment is a smaller two bedroom unit. The upper units is split over two floors. It has four bedrooms and sole access to the roof terrace.

The bearing walls of the building thicken toward the shear walls at the corners and diminish toward the reduced dead loads of the upper floors. The horizontal setbacks occurring across the plank floors serve as counterpoints to the vertical piers between windows. The building is largely an exercise in bringing some expressiveness and balance to the consideration of these forces.