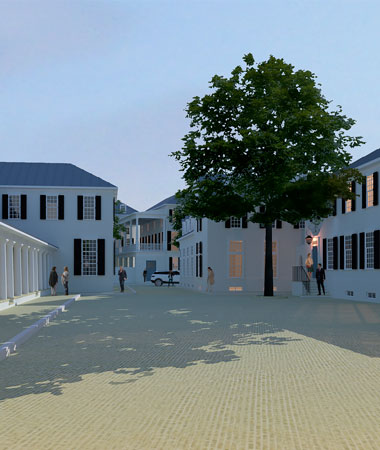 This is an unrealized infill proposal for a site near Charleston. It is a four acre outparcel of a nearly complete master plan, and surrounded on three sides by existing neighborhoods. There are no remaining entitlements for the parcel and so these alternates were put forward as a means of describing how it might develop, and with what kind of residential program, and at what densities. The parcel, if developed, would complete the existing road network. There are single family buffers against existing single family neighborhoods. The program included a public park next to a state road. Proposed roads, extensions of existing neighborhood roads, conform with existing sewer easements that run jaggedly through the site. Alleys are extensions of existing alleys.

The main block at the center of the parcel is overly large and so we studied spaces developed in other large blocks- from the Beguinage of Bruges and Amsterdam, to Place Furstemberg in Paris, a monumental space of only 5000 square feet, to Morris Square in Charleston. Charleston also has extremely large blocks and Morris Square is a new project that reorganizes the middle of one large block around a semipublic green. We did two variants of a mid-block space so that lots in the middle of the large block would have generous frontages. Both alternates are bisected by small twenty foot rights of way that bend along the existing utilities lines.

In the two alternates, we studied different mixes of small free standing houses that would be easily phased, attached single family houses, and small apartment buildings. Lots that couldn’t be serviced or parked off streets are serviced off small private courts.