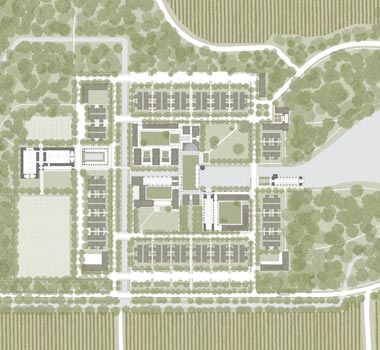 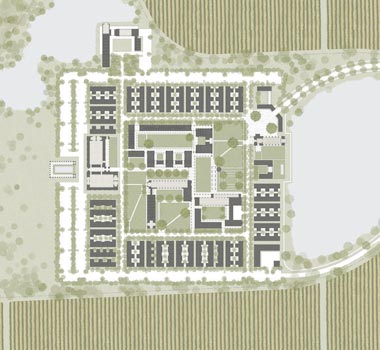 This was a collaboration with DPZ who did the master plan and the perimeter housing. The program is a residential campus for a new school of 300-350 students. The remote site is in Florida’s agricultural interior, among tomato fields and on the edge of the wetlands,

FIRST STUDY PHASE
There is a band of housing around the edge of the campus, enclosing an inner campus of about five acres. The regular planning of the repetitive one story dorms is a foil for the irregular cross axial layout of the inner campus.

The inner campus has four quadrants. The northeast and southwest quadrant are open and the northwest and southeast quadrants are enclosed courtyards housing classrooms and offices, dining and student center, and library and administrative offices. The chapel and gym are at opposing ends of the principal east-west walkways. The play fields are west of the main campus either side of the gym.

On site water storage is laid out along both a north-south, and an east-west axis, and eventually drains offsite into existing canals and then into the wetlands. There are wetlands both east and west of the campus. New roads have to be brought to the site. The entrance road approaches on a diagonal from the northeast, providing a view of the principal structures around the large open quadrant. There are inner and outer services roads either side of the housing. Parking is outboard of the housing, convenient but out of sight of the inner campus.

SECOND STUDY PHASE
In this follow up phase, the area of lake was increased fivefold in order to reduce the cost of fill. The site has to be raised almost five feet. At the same time water and drainage was removed from within the central part of the campus. The square footage of housing was increased by fifty percent and parking more than doubled.

As the water was removed the central campus tightened up a little more and the housing layer at the perimeter got deeper. While the core campus still has four discernible quadrants, and while most of the principal axes organizing the campus remained in place, several shifted, and almost every building in the central core moved around. The chapel moved to the gate at the northeast corner in order to give it more prominence upon approach to the campus. The gym came closer to the rest of the campus. The library and dining halls switched locations. Only the classroom group in the northwest corner remained in its previous location.