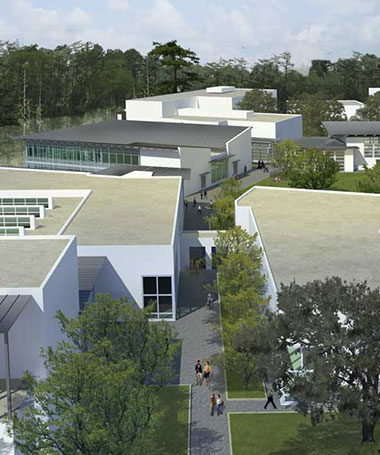 This is an office expansion of 300,000 square feet for 11-1200 new employees who will be brought to this small town from acquired companies all over the country. The expansion would nearly double the size of the existing facility when fully implemented. Part of the charge was just the phased accommodation of such a large increase in staff. But part of the job was also to create an especially attractive work environment that would help make relocation more attractive.

The existing facility sits on a beautiful 30-acre parcel within an existing pecan grove, and at the edge of a bayou. The company wanted to build on the natural advantages of the site by expanding toward the water, without cutting the existing facility off from views toward the water. The several newer structures need to reconcile freer access to the outdoors and more flexible movement throughout an expanded campus with the security requirements of the single access facility there now.

Few people venture outdoors at the existing buildings because the climate is hot and damp and the outdoor spaces are large and daunting to cross. Exterior spaces of the expanded campus are smaller, more numerous, and more varied in their character or orientation. The new buildings are used to afford the new gardens increased shade.

The new servicing of the building uses the existing service dock, surrounding it by back of house program on additional sides. The parking garage is at a sufficient remove from any offices. The proposed central plant contributes to spaces along the walk from the parking garage and would be passed several times daily without effect.