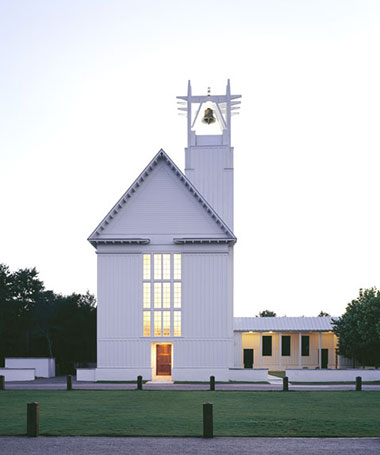 This is an interfaith chapel for two hundred people, built on a site reserved for it in the town plan. The church board asked only that the design serve all members of the community, that it have an element that could be seen from a distance, and that it is made of materials characteristic of the region.

Seaside design guidelines originally reserved recourse to classical architecture for public buildings often overwhelmed by larger private buildings. However, by the time the chapel was designed in 1999, houses had co-opted classical architecture to such a degree that it had lost its power to distinguish public buildings. Classical architecture had been somewhat debased by the obvious ambition of so many overweening classical houses. The chapel still had the obvious advantage of the prominent siting at the head of Ruskin Square, (its siting forward of adjacent houses of Forest is yet another reference to St. Philip’s on Church Street in Charleston) but the building is ultimately distinguished by the scale and detailing of the elevations. It appeals to both the stolid horizontal classical tradition that Lizz and Andres originally imagined for Seaside’s public buildings, as well as to the Gothic tradition’s verticality. The elevations, inside and out, consist of vertical and horizontal elements playing to a draw.

Alongside references to the high traditions, however, is a general wariness of all high traditions. The chapel – the last public building to be completed at Seaside – was a return to Seaside’s vernacular roots; to the open framed beach houses of Robert Davis’s youth; to the cracker bungalows of Lizz and Andres’ original Seaside codes, and to the stick built Gothic of the rural Alabama bishopric