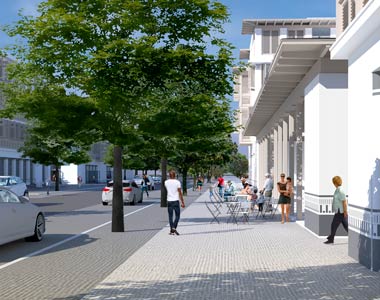 There have been proposals for a beachside hotel in Seaside since the years of planning the town in the early 1980’s, but problems have always arisen with allowable height, or parking, or servicing, and it has always been easier and more remunerative to just sell residential lots on the beach.

There are very few development parcels remaining in the town. This proposal, based on a master plan by Robert Davis and Dhiru Thadani, sprawls over six separate parcels, both north and south of county road 30-A. The proposal addresses only the three first phase parcels on the east side of town- the current site of Perspicacity, the site of the Seaside Motor Courts, and the undeveloped parcel on Central Square, facing 30-A.

Most of the beach parcel is limited in height to 22 feet, and it is over the coastal construction control line. The east end can go to 49 feet. The motor court site, which we developed with Robert Davis in 1989 with small temporary structures, has a contentious redevelopment history because of proposed densities. Parking problems have only gotten tighter throughout town.

All these parcels are now very valuable and so increased density is inevitable. The biggest challenge was to replace the existing scale of the universally loved bazaar on the dunes, with a building with a 20,000 square-foot footprint that did not look over scaled. The building on the beach also has to help form a new plaza on the Gulf of Mexico and it has to form the south side of the very large Central Square. The east end of the beach parcel, along with the last site on the Square, affords the possibility of forming a gate to the Square as you approach on 30-A from the east.

Previous development proposals for the motor court site had come to grief because of how they crowded the footpath dividing the site from the adjacent houses. In developing the old motor court site, we tried to get all of the required square footage within the western half of the lot in order to place a 50-foot garden buffer between the four-story wing along Quincy Circle and the first street of single family houses behind the town center. This also had the effect of helping change Quincy Circle from an alley into something more nearly like a street.