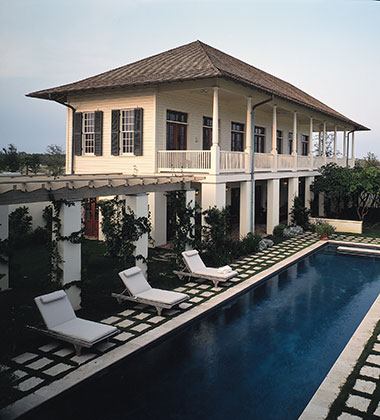 A sideyard house is a plan type developed specifically for lots in those city blocks for which street frontage is valuable but interior block space is ample and cheap. Lots in such blocks tend to be narrow and deep. The sideyard house type is correspondingly narrow and deep, and is often developed in series, so that rooms face south onto porches, and porches on to side yards whose privacy is maintained by a blank north wall on the adjacent house.

This particular sideyard house was designed for a lot in a small, isolated, low lying sub-tropical coastal area. This area long remained undeveloped because the land and climate was hostile, and the coastline especially impenetrable. The character of this house derives from the power plant at Henry Flagler’s hotel in St. Augustine, whose stolid palm tree columns, and broad eaves reflect an unforgiving subtropical climate, and express a frank indifference to the fey qualities of Charleston’s classical refinement.

The principal rooms of this house are upstairs, which is common in tidewater houses. The transverse exterior stairs that rise to these rooms from the street provide a layer of privacy between the street and the front rooms of the house. The lower, darker and less refined bedroom spaces of the ground floor are distinguished from the taller, brighter public rooms of the upper floor. The bedrooms enjoy the privacy of the walled garden. The upper rooms enjoy a long view from a corner lot.