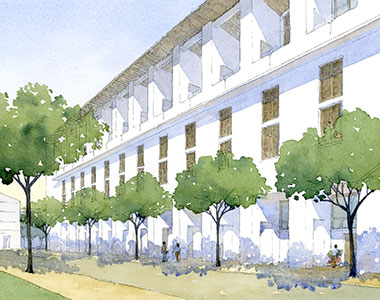 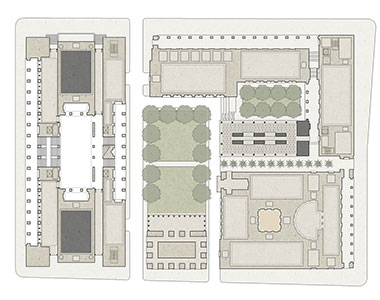 These studies bridge DPZ’s master planning efforts for the core city, and the more detailed programming and contracting process for new buildings to replace those damaged by the 2010 earthquake. While the block was planned for the high courts, the studies describe a model block consistent with master plan requirements for administrative buildings. The studies test block capacity, and the impact of stipulated ground floor parking and small mid-block utilities plants, both of which will require innovative planning.

The block is roughly a hectare in area, and is diagonally across from the National Assembly block. The old Palace of Justice building had spanned the length of the north side of the block, and with the National Assembly building, had dominated the city skyline with its height and its distinct French Second Empire rooflines. And while this is overwhelmingly a planning exercise, the question of appropriate building methods- structural systems, materials, shading, ventilation- arise as a matter of course.

The block was planned with minimal programming input, but there are to be three to four buildings sites- at minimum, the courts building on the old Palace of Justice site, the district attorneys, and the bar association. The master plan stipulated ground level parking because there is a high water table. And while the master plan anticipated three possible scenarios for bringing utilities on line for the core district, it is likely that the courts block will be built before utilities are in place and will have to depend on a mid-block plant. Specific efforts were made to mitigate the impact of either the parking or the package plant on the interior of the block.

As the master plan anticipated, parking is typically hidden from the streets by colonnades. Because the parking levels have large, deep footprints office floors above the parking level are typically organized as thinner buildings around upper level courtyards.

Four alternates show different way to stack and phase anywhere from one to four courtrooms and integrate them with the rest of the agencies in the block that will be using the courts building.