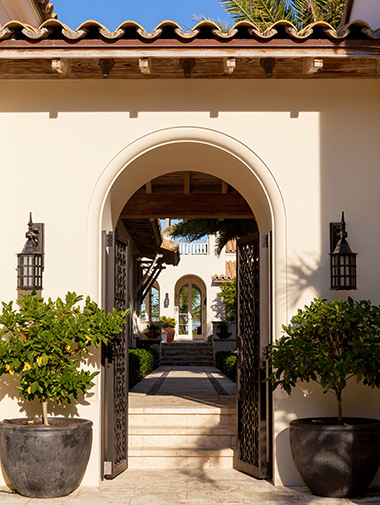 This courtyard house sits on a deep ocean lot, twenty feet above the water. The site falls slowly to the west and the approach to the house requires modest terracing. The house is open on the south side and is serviced on the north side, proximate to the main rooms of the house, but out of sight from the gardens.

The house is mostly laid out on a single level which is why it can enclose such a large courtyard. Only the master bedroom is upstairs and this second floor wing, marked near the entry hall by a balcony, is used to give the dispersed house some semblance of a central space. The upper garden is further divided into a paved terrace on the north side, serving the kitchen and family room wing, and a lawn off the living room wing.

The value of ocean frontage is always readily obvious. The question is always how much value, interest, and pleasure can be added off the ocean, in the interior of the lot. At night the ocean will go dark and the courtyard will become the principal source of interest and activity.

The landscape design was by Nelson Byrd Woltz.