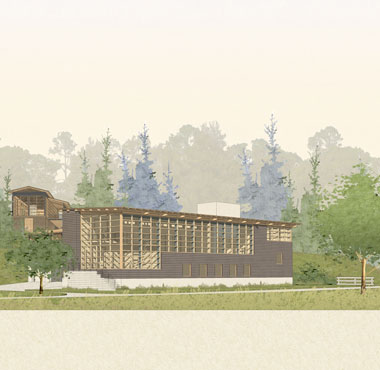 This 2250 acre site is the largest undeveloped parcel of land close to Auckland, New Zealand. It is on the coastline north of the city, a heavily forested site located between two rivers. The developer of the project, acknowledging the regional significance of the parcel, has developed a small portion of the property in order to maintain its fundamentally rural nature. Public access to the coast has been maintained. A large 300 meter deep meadow along the water’s edge will preserve the character of the coastline. Planted pine trees will be carefully thinned. Swaths of native vegetation will be untouched. Houses will be sited among the pines.

The plan types and site plans reflect considerations of east views to the coastline and the preservation of the water views of neighboring houses, north light, privacy, and on most lots, the negotiation of considerable slopes. Most lots fall at least a full story from front to back. Some lots approach thirty percent grades and fall considerably more. Compounding the problem, houses are typically run perpendicular to the contours in order to preserve up-slope views, and there are strict height limits. Plans reflect strategies for maintaining privacy, and for retaining the hillside on the high (west) side of the lots. “L” shaped plans are often used to balance the considerations of views and daylight and privacy.