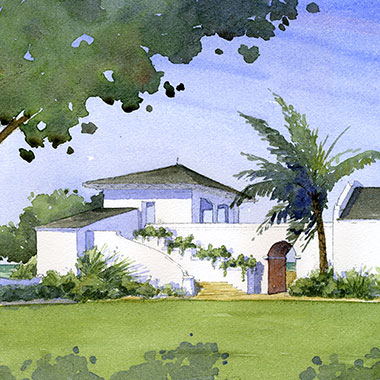 The Turks and Caicos are a roughly circular formation of islands around a high forty mile plateau of shallow water, surrounded in turn by steep sea walls and 4000 to 7000 foot Atlantic troughs. This produces spectacular combinations of deep blue and shallow green water throughout the chain of arid islands.

This project is a clubhouse sited on a steep rocky parcel that falls eastward to the Atlantic surf and looks west over shallow green flats. The wind blows steadily off the ocean so the program is organized around three courtyards corresponding to three related groups of spaces- the dining room, bar and kitchen; the game rooms- billiards, library, bowling alley and theater; and the fitness rooms- squash, lockers, exercise and weights.

The entry sequence to the club falls steadily from courtyard to courtyard, starting at 54 feet above sea level, descending to a middle garden at 48 feet – at which point you enter the building itself – and descending another six feet to the courtyard around which the dining and bar are arranged. At that point one faces large walls of glass opening onto the Atlantic. The geometry of the courtyards is splayed in order to widen the scope of the views to the water.