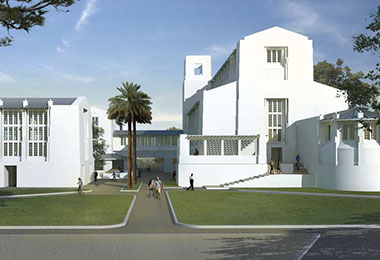 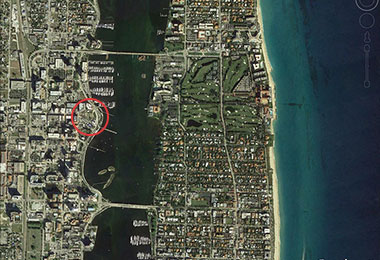 This is a proposal for a new library on a site that has historically been the heart of this midsize city. The site has figured in city master plans of the last one hundred years, including an early plan by John Nolan. The site is the terminus of the principal east-west street of the city, and is located on a prominence on Lake Worth, looking east to the barrier island town of Palm Beach.

The criteria for the project included several urban design considerations. The city wanted to connect Clematis Street and the existing Centennial Fountain plaza with the waterfront, while simultaneously commissioning a workable library facility three times the size of the existing library on the site. They wanted to continue to accommodate the annual music festival, and to maintain the fountain. And they wanted to create a civic symbol for their city. The library program provided for a cafe, and community outreach spaces for after hour meetings, research, and to engage the activity of the fountain plaza. The design committee minimized the need for surface parking, as so many existing parking structures were within a few blocks of the site.

The buildings are composed and sited to serve the creation of the new spaces. They are a picturesque group of structures meant to be attractive from all sides, and intended to make pedestrian movement through the site fun and stimulating. The courtyard and the river terraces extend the axis of the existing street, teasing crowds by degree from the popular fountain plaza to the water front, and thereby fulfilling the project’s primary urban responsibility. The design derives from specific regional traditions, building practices, climate and culture, without aspiring to parochialism. The project would be among larger and bulkier commercial buildings at the waterfront. The basic composition of the pieces, the monumental language of the buttressed walls of the buildings, the typology of the constituent elements, and the iconography were all developed to convey the highest public aspirations for an important civic building on a prominent site.