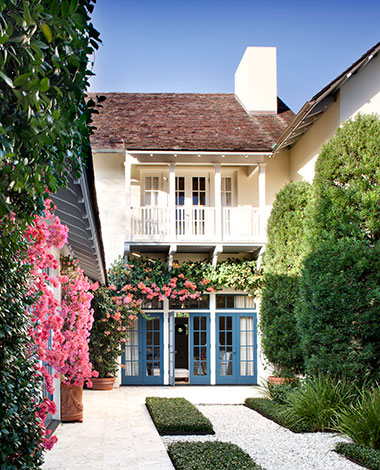 Each of these groups of fee simple row houses was built to preside over the separate small parks on which they sit. The lots for the first group sit at the south end of a two block park in the middle of a residential neighborhood. The lots were 3200 square feet, 32′ wide and 100 feet deep. The houses were to be between 2000 square feet and 2800 square feet, to include a main house, and a detached garage and garage apartment facing a street at the rear of the lots. The program also required a mid lot garden.

The plan and site plan follow readily from the buildable footprint. The elevations were designed to read both from an urban scale at a two block remove at the far end of the green, and as individual units from up close. The property lines are discernible at the breaks in the ridge line where the depths of the units change.

The main houses face the park. Their principal rooms face the interior gardens because the original land plan called for a public hall to be built directly in front of them. The garage apartments face a minor street to the south. The guest units are disposed around an exterior stair. All rooms of the guest units open onto a recessed porch. There are interior gardens of at least 1000 square feet. Wings along the common property lines address privacy between lots.

The second group of row houses has larger 43′ wide units on irregularly shaped lots. They develop the window and door language of the first group, with a complexity commensurate with their greater length. They face the long side of a small park with an apartment building and a single family house on adjacent sides.