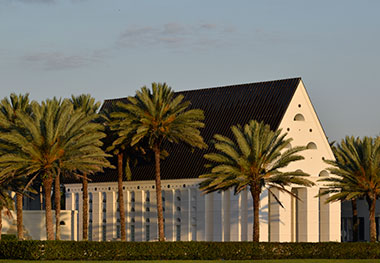 (The following piece was written for a small book on Leon Krier’s projects, published by the Notre Dame School of Architecture on the occasion of Leon’s being awarded the very first Dreihaus Prize for his contributions to classical and vernacular architecture. The editors asked for a short piece on the significance of the Windsor town hall and on what it was like to work with Leon on the job.)

It has become something of a lecture circuit obligation these days for an introductory speaker to remind Leon Krier’s audience of his youthful declaration that he “would not build, because he was an architect.” The immediate point, of course, is that these days his lectures include recent work. We all understand the rhetorical power of what he said, but he is reminded of this out of fondness anyway, as one might tease any accomplished friend about an intemperate or overly serious remark.

The importance of his town hall at Windsor lies to some great degree in the fact that during the enormously protracted gestation of the project Leon, by his own admission, came to enjoy building. We do Leon a disservice, however, to think that the way was simply laid out for him to design this beautiful building. What Leon endured and even came to appreciate was, even at Windsor, a profoundly compromised process. It took ten years to get the building built. An early design first appeared, unidentified, at the beginning of his 1992 monograph, at a point when Leon had probably given up on its ever being built. The building did not finally open until late 1999.

At the same time that the famous New York garbage barge moved down the length of the east coast, denied entry at port after port, Leo’s then un-built design, an outright gift from Galen Weston, was moved ignominiously from site to site as various Windsor neighbors complained about having it next to their houses. The building was completely redesigned several times in order to save money and there were times when one party or another came close to walking away from the project. It survived three of Galen’s directors of development, and four of his own construction managers.

Florida has a charming tradition in which interior designers and engineers attempt during the annual session of the Florida legislature to usurp the unique authorities granted architects under the language of the Architectural Practice Act. It was fitting, then, that an interior designer at one point seriously proposed an interior for the hall dominated by Henri Rousseau-like tropical prints, and a civil engineer re-located the axially sited building by fully seven feet.

On the other hand, some prosaic requests brought pleasing, last second departures from the original idealized design. The powerful, equally spaced piers are not quite square or equally spaced because of a last minute request for two extra feet of interior width. This also resulted, however, in a satisfying central entrance bay the least bit wider than the flanking bays. The horizontal stucco band spacing, originally equal as well, had to be graduated, diminishing from bottom to top, so the second band cleared the shortest legal door height. Now there is an appealing forced perspective that derives from the requirements of the voluminous Southern Standard Building Code, a document too seldom credited with producing poetic results.

The building survived in the form we see it today because of the extraordinary efforts of a small town commercial contractor with patience, talent and humor; because of Leon’s resolve, and intelligent compromises with the limits of the building trades, because of George Pastor’s intelligent selection of the right battles to fight, because of trades who never voiced any parochial skepticism about details they had never seen or done before; and because of Galen Weston’s unflagging support for the project.

The inimitable naif craftsmen of Leo’s drawings had names with stories this time. The stucco contractor, a preacher and former professional arm wrestler, agreed to step in at our request to replace the low bidder, who would have been incapable of executing the details. We learned later that he lost his shirt on the job. He never complained, and never cut a corner. Of course the sun wouldn’t fall on the building in quite the same way without the skills he brought to bear on the building’s Portland cement skin.

There are not enough people like Galen Weston around to fill the world with beautiful buildings like this one. Most decent buildings will have to be built with the help of philistines and bastards, schemers and intriguers: people of insufficient imagination or insufficient faith. They will be built or not built, built well or badly, because of luck, stubbornness, ambition, duplicity, timing, fatigue, laziness, revenge, generosity, and largeness of heart.

Flannery O’Connor said of fiction that “it is about everything human and we are made out of dust, and if you scorn getting yourself dusty, then you shouldn’t try to write fiction. It’s not a grand enough job for you.” The same can be said of building, and what I assume Leon meant when he said that he came to enjoy building was that, with all its failings, it is a grand enough job for him. The very real frustration, after all, is nothing compared to the pleasure of building, and of being human.

What Leo came to enjoy was not an idealized abstraction about building but a spectacularly flawed process. These flaws are not peripheral annoyances. They are central and unavoidable. Building is concrete and perfunctory, a sort of anti-theory or anti-poetry, constant reproaches for our occasional detached high mindedness.

Several generations of students have grown up with Leo’s drawings, poring over them not only for their charm and their accomplishment but for their incredibly distilled manner of instruction. After the house at Seaside and especially now after the Windsor town hall, it is difficult not to look at these drawings without renewed appreciation for the power the buildings would have had, should they have been realized. Perhaps because of the town hall, and Leon’s embrace of the building, we may not have to be so wistful about future projects.