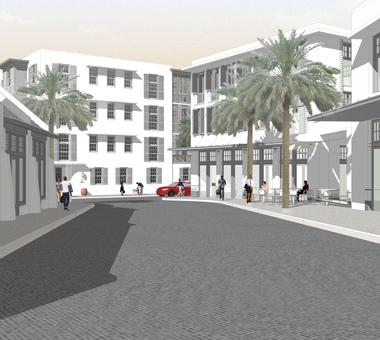 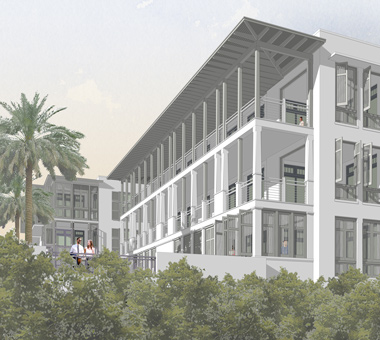 (The speculative project for this site of 2016 was not built. In 2019 we had  a chance to design the east side of the plaza as it was finally programmed and laid out)

Our office is a block from Sexton Plaza where state route 60, having come across the interior of the state from Tampa, ends at the Atlantic Ocean. It should be a magnificent public space, but despite a decent enough boardwalk, it is just a tepidly landscaped parking lot.

Public spaces like Alys Beach’s plaza on the Gulf of Mexico are rare. Rosemary Beach has several beautiful lawns at the Gulf, which are remarkable for their generosity. Alys Beach has other beautiful small plazas edged by houses. Seaside aspires to a public plaza on the south side of 30-A and has planned one.

The plaza at the beach club is just the southernmost component of an incomparable series of public spaces extending from the wooded north edge of town to the Gulf. South Somerset Street descends from 30-A, affording a glimpse of the Gulf over very high primary dunes. As you approach the foot of the street, the Gulf disappears, and views of the water are restored by ascending the plaza stairs. The lower plaza narrows a little. The upper plaza widens to the east.

The success of the plaza will depend not only on the design of the plaza itself, and on the beach club, but also on the success of the condominiums on its east edge. The master plan is clear about their general siting. Their depths and their programming suggests the buildings will be fairly stolid and simple buildings. Their scale will be more the scale of the buildings on the amphitheater than the scale of Alys Beach’s residential streets.

The work in this second design binder builds on qualified approvals of some basic design options presented to the development team in April. The focus of that first binder was on choosing the right core, entry location, and parking configuration for each building, in order to maximize the use of the building perimeter for the residential floors.

This binder works in the slipstream of that work, developing it at a larger scale, looking at a few minor alternate plan layouts, and at options for laying out the elevations, and finding the right scale and character for the buildings. Page 4 shows all the likely combinations of plan alternates. Elevation studies, for the most part, follow from those four combinations.