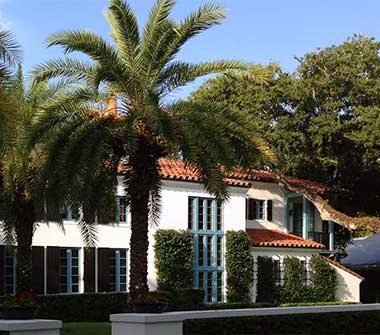 The Riomar section of Vero Beach’s barrier island was first settled in the 1920’s. The most memorable streets remain those so-called canopy streets, dirt roads that jog around large live oaks that cast the entire neighborhood into a cool shade. As Indian River county has been cleared first for grapefruit, and more recently for development, Riomar increasingly impresses with its near impenetrable subtropical forest.

The neighborhood is still dotted with wood bungalows and Mediterranean Revival houses that take up the imagery that George Merrick assiduously promoted for Coral Gables in the twenties. This language, common to California at the time as well, is one of three Florida traditions, along with the so-called cracker wood vernacular, and the moderne of Miami Beach, that Elizabeth Plater-Zyberk identified as Florida’s irreducible built heritage. The Language at its most endearing draws from rustic buildings with economical plans, picturesque volumes, and informal roofs. It first found expression in small cottages, but has been applied with increasingly dismal results on ever bigger, over scaled buildings, dependent more on a desperate application of classical detailing than on an affecting massing.