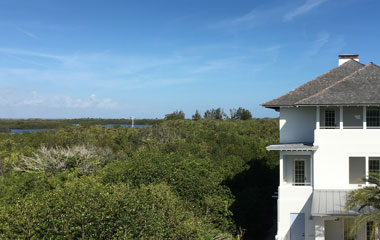 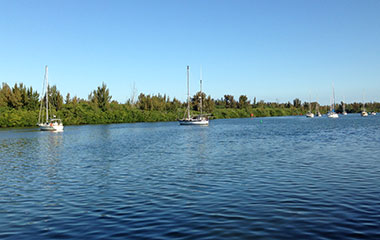 This site is on a perimeter road between an undeveloped square and Jungle Trail, an old service road along the Indian River that served the grapefruit groves of the barrier island. Pelican Island, the country’s first federally protected wildlife preserve, established under Theodore Roosevelt, is half a mile up Jungle Trail from the site.

The program called for twelve large apartments of about 3000 square feet, plus ground floor garage parking. While the value of the land lies in developing long views of the off shore archipelago, including Pelican Island, it was important at the same time to use the housing to help develop the square.

The square side of the lot, nominally the parcel’s back side, had to present the equivalent of a second front side. The onerous off-site parking requirement of two cars per unit could not be allowed to diminish any side of the site. This required enclosed parking courts, hidden both from the square and the semi-public gardens that run through the middle of the site plan.

Five buildings checkerboard the site, maximizing the long views, providing a foreground for long views, separating service courts from gardens and keeping the scale of the three story buildings reasonably consistent with existing houses on two sides of the square.  Most units access their lobby both from their own garages and from the public gardens.